What to Think About Dreams?

A popular parody of therapy shows a therapist asking a patient to describe his or her dreams. The parody makes sense. Dreams have been entwined with psychology since the early 1900s when Sigmund Freud, famed founder of psychoanalysis, developed a theory of dreams as manifestations of deep anxieties and longing that could be interpreted. 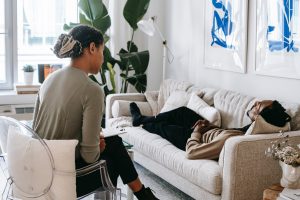 A man on a sofa speaks to a counselor about his dreams during therapy.

What do dreams mean? Why do we dream? Why do we fail to remember some dreams yet struggle to forget others? We know that sleep is vital to health, but what about dreams?

A couple is shown dreaming on a bed on top of thick grass in a forest setting.

Deirdre Barrett, Ph.D., an assistant professor of psychology in the Department of Psychiatry at Harvard Medical School, appeared on a podcast titled, “Speaking of Psychology: The science of dreaming.”

When asked why she thinks human beings dream, Barrett responded, “Well it’s not a simple question. It’s probably the one where you’d get the most disagreement among dream psychologists. Personally, I think that we have rapid eye movement sleep which is the stage in which most dreams occur along with all mammals for a lot of reasons, many of which are very biological. That certain neurotransmitters are being replenished in the brain during that stage of sleep and that there’s some very physical body reasons for REM that we share with all mammals. But I think evolution isn’t that simple, and when something’s been around since the dawn of mammals, it tends to have function upon function layered on top of it. I think for humans there’s a lot of problem-solving that goes on in that state… you would get everywhere from you know it has no function to you know dreams are sort of our wiser self, speaking to us, from other dream psychologists. But that’s my concept of it.”

Researchers know that sleep is a period of great neurological activity where memories may be reorganized and consolidated. Necessary information is processed and stored while less important details may be tossed into a recycle bin of sorts.

While scientists may generally agree on certain aspects of why we dream, they are divided on whether dreams mean anything. Some scientists surmise our natural inclination is to form memories. When we weave dreams into a story with meaning, these scientists believe it is only because this is in our nature. In essence, creating a plot out of a dream says more about us than it does about the dream having any real significance.

On the other side of the argument, some doctors believe that dreams are stories our brains weave. The stories are influenced by emotions and problems, full of symbols and clues that may allow us to process stress and trauma and find creative ways to work past it.

How to Dream and Remember the Dream?

If you are having traumatic dreams, it is a good idea to avoid trying to condition yourself to remember your dreams before you go to sleep.

It is best to talk to a therapist to get to the underlying cause of the bad dreams. Also, not every dream has meaning, and in many cases, dreams don’t mean what we might think they do.

Talking to a therapist can give insight into your feelings, thoughts, and dreams, both the dreams you have while sleeping and the ones you have waiting for your arrival in the future. To talk to one of our therapists, contact us here at the Jacksonville Center for Counseling.