Suicide Awareness, Prevention, and the Effects on Survivors

Suicide is sometimes referred to as a selfish act or a cowardly act, but it is really a desperate act, an act of despair. Also referred to as the easy way out, there is nothing easy about committing suicide for the one making that choice to end his or her life or for those friends and loved ones left behind. 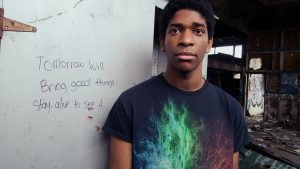 Man Standing by a wall with a positive message on it.

September is Suicide Prevention Month, and as the month draws to a close, we wanted to talk about this important topic for the benefit of those who may be considering suicide and the survivors left behind after a loved one’s suicide.

According to the CDC, suicide is the tenth leading cause of death in the U.S. In 2018 1.4 million people in the U.S. attempted suicide and 48,344 died of suicide.

While the numbers are staggering and upsetting, they are still distant for people who haven’t lost someone to suicide or contemplated suicide themselves. Numbers are sturdy and reliable yet also impersonal.

Celebrity suicides prove that money, fame, and accolades aren’t enough to prevent someone from succumbing to his or her own despair. Many people were understandably shocked when hearing about celebrities like Robin Williams, Kate Spade, and Anthony Bourdain committing suicide.

For those left behind after a friend or loved one commits suicide, the days and nights can seem unbearably long. You may be plagued by grief, analyzing every exchange, wondering if a sign was missed. If these haunting thoughts unearth some moment that seems important, you may be devastated and feel somewhat responsible for not picking up on clues and for not knowing when to intervene.

It is important to realize that sometimes the signs of suicidal thoughts and behavior are incredibly subtle. Suicidal behavior is talking about or taking actions that lead to suicide, and some people may even disguise suicidal comments as jokes.

Suicidal individuals may talk about feeling hopeless, lonely, or say they have no reason to live. Sometimes these people give away possessions to put their affairs in order. They may even say goodbye to friends and family as if they are going on a trip.

Suicidal individuals may have mood swings, show signs of anger or anxiousness and agitation. They may avoid social interactions and sleep and/or eat too much or too little.

Individuals may exhibit more extreme behavior like drinking and drug use. They may drive too fast and make other reckless decisions. They may even buy a gun or steal medication.

Most people who commit suicide do so because they see no alternative to feelings of hopelessness and sadness that often emerge from a temporary situation. Depression, chronic pain, substance abuse, history of abuse, and/or bullying, loss of a job or important relationship, and psychiatric disorders are all risk factors. It is important to know that young people are impulsive about the decision sometimes.

Many people who attempt suicide and survive are able to go on to lead fulfilling lives if they get the help they need.

What to do to Prevent Suicide

If someone you know is exhibiting suicidal behaviors, you should talk to the person in a non-confrontational way. The most important thing you can do is listen. Be calm, reassuring, and encouraging without any judgment.

You can ask the person questions to open the dialogue such as, “Are you thinking about taking your own life or hurting yourself?”

Help them find the help they need. There are plenty of resources available, but they may not be in a state of mind to seek help themselves. Make phone calls and set appointments for them. 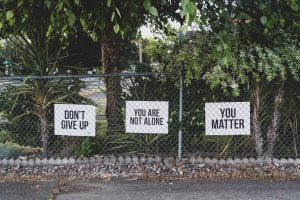 Signs to remind people not to give up, they aren’t alone, and they matter

Coping After a Loved One’s Suicide

Sometimes our best intentions aren’t enough. Unfortunately, sometimes we become acquainted with suicide after it has happened. Sometimes suicide comes without warning and does not give us a chance to intervene.

If you are coping with losing someone to suicide, there are ways you can cope. We often feel that we must bury painful thoughts, but by talking about the person you lost and what happened, you can begin to process the complicated emotions you may be experiencing.

Be kind to yourself and to others who are grieving. Share your thoughts and give each other support.

Dealing with the death of a loved one is hard enough but factoring in the notion that the death is by choice makes it even harder. You may blame yourself for failing to recognize the signs, but some people hide their pain so well we may not see it.

If you are having difficulty coping with the suicide of a loved one, you and any family or friends having trouble processing the painful emotions can always reach out to a mental health professional for help.

If you ever find yourself contemplating suicide, please seek help from a professional. You don’t have to face those feelings alone. A professional can help you identify the triggers for the negative feelings and work out a plan to overcome whatever challenges might be overwhelming you.

Whether you know it or not, you are important and you matter. You affect the people you meet, even if you don’t always see it. Circumstances that cause negative feelings aren’t permanent. With help and support, you can change your view and change your life. It is never too late.

There are also many support groups with help available 24 hours a day. One support group you can contact is the National Suicide Prevention Lifeline.

If you and/or your family need to talk to a professional about suicide or any other troubling issue in the Jacksonville, Florida area, feel free to reach out to us at the Jacksonville Center for Counseling.