Have you ever heard someone dismissively explain away a behavior as OCD, or has someone ever told you that you were acting OCD? It is likely that the label was inaccurately used.

Obsessive-compulsive disorder (OCD) is a mental health disorder that is often represented in film, television and media by characters with funny and memorable quirks. The compulsions of the character afflicted with OCD often lend humor to scenes that would otherwise often be dull or unremarkable.

However, this portrayal is terribly inaccurate. When it comes to OCD, the compulsions are only half of the equation. The compulsions that are depicted in film, television and other media as funny little quirks are the result of immense distress and fear. The real-life scenarios where compulsions endlessly play out certainly aren’t funny for the people unable to refrain from repeating these behaviors. 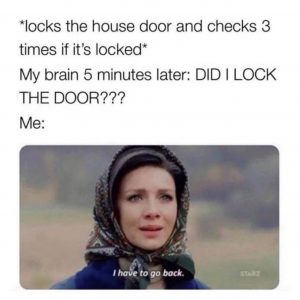 Meme from the Starz show “Outlander” about checking to see if a door is locked multiple times and then moments later wondering if you locked the door.

Sometimes when people find themselves engaging in repetitive or anxious behaviors, whether it is hand-washing or organizing, they might make the offhand remark, “Oh, that’s just my OCD,” or “I am OCD.”

Is there truth in that casual remark? What is OCD really, and how do you know if you have it?

Obsessive-compulsive disorder (OCD) is characterized by unwanted thoughts, ideas or images (the obsessive side), that lead to repetitive behaviors that may include checking on things, washing hands, excessive cleaning and other actions that become the corresponding compulsions.

Once these thoughts form, the person with OCD experiences compulsions that exist to prevent or decrease the distress of these ideas. Some of these individuals are plagued by the impulse to perform complex rituals when intrusive thoughts materialize.

The recurrent obsessions for those with OCD are not the same as the obsessions often described in everyday speech. We may use the term “obsession” to describe something fun and pleasurable that we are excited about.

For those with OCD, obsessions are a struggle because once they emerge, these intrusive thoughts hold hands with fear, invite extreme anxiety to the party and prevent the individual plagued with the thoughts from living a normal life while the vicious cycle keeps repeating.

There are obsessions centering around cleanliness that are the product of an intense fear of dirt, contamination, germs and other undesirable ideas that could sully the surroundings.

There are fears of being responsible for something terrible or harmful like hurting someone in a violent manner, sexually assaulting someone, the fear of screaming obscenities and insults, fear of one’s questionable morality, fear of harming oneself or others by failing to be careful, superstitious fears, fear of losing things, fear of things being in disorder or imperfect, and the inability to make decisions.

Compulsions are behaviors that materialize with the obsessions. The intention behind the compulsions is to try to combat or diminish the obsessions. Unlike the characters with OCD in television shows and movies, people with this disorder often realize that these behaviors are irrational yet feel compelled to go through those motions.

The behaviors are an overwhelming impulse, a desperate effort to quiet the fear, worry, and sometimes even disgust the person is feeling as a result of the obsessive thoughts. These compulsions may seem minor, but they are time-consuming and have a way of interfering with daily activities.

Repetition alone does not constitute a cause for alarm. After all, many of us stick to routines where we may be repeating the same behavior each day. However, for individuals with OCD, the compulsive behavior exists entirely to try to quell the anxiety that emerges with the obsessive thoughts. These people do not feel that the repetitive actions are fun or productive. In fact, they feel the opposite, but habits that coincide with such strong reactions are some of the hardest to break.

Examples of compulsions might be excessive hand-washing, showering and other cleaning. These individuals may also repeatedly check things like making certain a door is locked, the stove is off, etc. They may be concerned with symmetry and organization. They may count while going through any of these motions.

The compulsions may involve thought. People with OCD sometimes dwell on details of their daily lives in an effort to assess whether they have done something wrong. They may repeat activities like tapping, blinking, and opening doors in multiples of a certain number they deem is good. They may also recite prayers.

How is Obsessive-compulsive Disorder Diagnosed?

If some of this sounds familiar, that doesn’t necessarily mean you have obsessive-compulsive disorder. Many people experience some form of intrusive thoughts at some point in their lives, and some also exhibit some repeated behaviors.

The difference is in the disruption. For people with OCD, these thoughts are incredibly disruptive and distracting. The thoughts interfere with their normal routines, and the distress and discomfort that arises from these thoughts prompts the time-consuming, compulsive actions.

For a diagnosis to be made, the obsessions and/or compulsions must be a major interruption of one’s daily life, trigger intense anxiety, and last for more than one hour a day.

The most effective treatment for OCD is therapy by a licensed mental health professional, and in some cases, medications called serotonin reuptake inhibitors may be needed.

There are different types of therapy for this disorder, so if you are in therapy and still suffering, communicate that with your therapist because there are other options you can explore together. Some options are still being researched.

This information should help eliminate the desire to use OCD as a flippant term to describe casual repetitive behaviors because there is nothing casual about OCD. The people with OCD are often anguished by thoughts they can’t easily vanquish or ignore. Those with OCD battle triggers to an unsettling pattern of behavior that can prevent them from holding a job, maintaining a relationship, socializing or even feeling well.

It is estimated that one in 100 adults in the U.S. currently have OCD, which is between two and three million, and at least one in 200 children and teens have this disorder.

There are far too many obsessions and compulsions for us to list. If you find yourself plagued by any thought and/or prompt to repeat some kind of behavior to quell that thought, please feel free to reach out to us at the Jacksonville Center for Counseling. No one should have to face these feelings alone.